In his first political speech since his reelection, President Joko Widodo, told the nation “We could be one of the strongest countries in the world.” This is true and everyone agrees. But what most people might not know is that a key part of the drive to improve begins with children. It begins with stunting. It begins at the Posyandu.

If we could eradicate stunting today, we would save three kids a minute. Before your coffee has gotten cold, we could have saved three kids from irreversible brain damage, eliminated 7 out of 10 cases of preventable illness, and broken the cycle of poverty. But without the Posyandu serving as the centerpiece of change, there’s little hope to be had.

And while Indonesia has made great strides under President Jokowi, slashing stunting rates by 7% in the last five years, there is still much work to be done. And the Posyandu shoulders most of that work, especially when it comes to stunting.

By now most everyone has heard of stunting. Stunting is complicated, a lot of people know that. It encompasses everything from toilets and open defecation to breastfeeding and maternal health. But what few people know is that Indonesia’s numbers are on par with Sub-Saharan Africa—Rwanda, Ethiopia, South Sudan. Stunting truly is Indonesia’s silent emergency. Two million Indonesian children every year suffer from stunting.

Posyandu was established in 1986, but with decentralization came confusion. As of today the central government is responsible for procuring vaccines and district governments for service delivery (including funding a Posyandu’s immunization operational costs). Searches for Posyandu’s annual budget have failed, although some have suggested that its only $60 USD per Posyandu per year. Indonesia can’t invest in its future without investing in Posyandu.

The latest research available indicates that there are 289,635 Posyandu serving 82,190 villages in Indonesia, or approximately three and a half Posyandu per village.

Children who participated in a child health and nutrition program delivered by Posyandu village health posts in the 1980s and 1990s were 19-25 percent less likely to be stunted or underweight (Wai-Poi, 2011).

According to a World Bank report conducted across 22 provinces and published in 2016, only half of Posyandu calibrated their weighing scales. Length measurements such as the length board and measurement tape were only available at 30 percent and 67 percent of Posyandu, despite this being essential to the diagnosis of stunting. Even more saddening is the fact that only about 50 percent of Posyandu offered hygiene and sanitation counselling.

This is critical. Simple, life-saving information never makes it to the people who need it most. NGOs are obsessed with Apps and train-the-trainer models. But the bottom line is that the moms and dads rarely get the information they need. These life-saving interventions are not getting down to the village-level. Despite impressive improvement, some 70 million Indonesians still defecate in rivers, fields, or the ocean on a daily basis. And building more toilets is only part of the solution. If you build a 60-year-old woman a toilet, the first question she asks is “Who will clean this?” The answer is always “You,” which is why most NGO-funded toilets go unused or end up filthy and broken after six months. Meanwhile, pregnant mothers are not taking iron and folic acid. Worst of all, due to a lack of instruction at the Posyandu level, mothers are mixing formula with contaminated water. Their kids have diarrhea so often it’s not even considered an illness.

That 22 of the 34 ministries are focused on stunting is great, but unfortunately, Posyandu, which is the most important piece of the stunting puzzle does not fall under the jurisdiction of any specific ministry.

The government already spends approximately 51.9 trillion Indonesian Rupiah on nutrition interventions each year, which is comparable to other low-middle income countries. However, not all is spent on the most cost-effective interventions.

We all agree that in order to save 2 million children we have to start at the Posyandu. For most Indonesians the Posyandu remains the go-to spot for information. It should be where you measure your child’s height, it’s where you get immunizations (according to the World Bank, more than three-quarters of all vaccinated children in Indonesia, receive their immunization at the Posyandu), it’s where you learn to breastfeed. But it’s not. Of the 300,000 Posyandu in Indonesia, more than half are dysfunctional.

For roughly 10 million rupiah you can save 100 children a year from stunting. You just have to invest it in the right place. And it doesn’t have to be you personally. It can be your motorcycle club, your arisan, and if you are part of a Billie Eilish fan club, you can celebrate her birthday by sponsoring a Posyandu.

Think about how much 10 million rupiah really is. If you drink a frappuccino from Starbucks every day. You are spending roughly Rp 70,000. If you skipped that same Starbucks every other day you would have saved enough money to support a Posyandu and save 100 kids from stunting.

Where do we start? Tend to the part of the garden that you can touch. Rather than blaming a ministry or bupati, the onus is on the public to step in and play their part. There is no reason we can’t support a Posyandu in a village close to our hearts. Take kampung Komodo, for example. Kampung Komodo is just around the corner from world famous Loh Liang, the entry point to Komodo Nasional Park. And while thousands of tourists, celebrities and influencers flock to the park to see the dragons on a weekly basis, the village next door goes unnoticed.

Maybe the next time you drop by your favorite tourist destination—Wae Rebo, Toraja, Rinjani—you drop by the village and ask about Posyandu. Ask if the kader are trained, if they have a scale, if they are measuring the height of kids? But if we busy ourselves with finger pointing and playing the blame game, we’ll never get anywhere. Instead, let’s all do our part to save the next generation of children from stunting by skipping Starbucks, or avoid ordering Go-Food a few weeks a year, and put that money toward training and support for kader. They’ve done so much for us, it’s time we do something for them.

Or you can reach out to your favorite LSM or NGO. Don’t invest in the Apps or the too-good-to-be-true solutions. Invest in the kader, who wake up early, go to bed late and do it all with a smile. Ask what your favorite LSM is doing to support Posyandu. There are more than 50 LSM out there focused on grassroots, village level change. 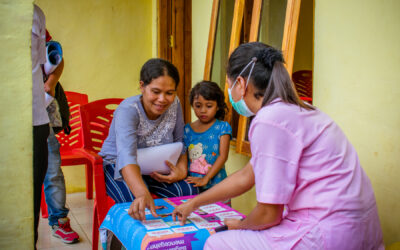 Why Community Health Workers (CHWs) are Keys to Stunting Prevention